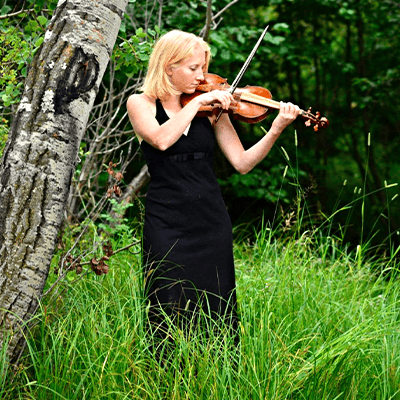 Violinist Carrie Krause’s “elegant, sparkling performance brought audience cheers”—Seattle Post-Intelligencer. Raised in Fairbanks, Alaska, Carrie Krause performs as a baroque violinist with ensembles across the country and on many international series, such as the BBC Proms and Utrecht Early Music Festival. She has appeared as principal of the Oregon Bach Festival, Seattle Baroque, Spire in Kansas City, and Apollos’ Fire, among others, and as soloist with Juilliard415, the Calgary Symphony, and the National Repertory Orchestra. In Bozeman, she serves as concertmaster of the Bozeman Symphony and is the founder of Bozeman’s newest arts non-profit, Baroque Music Montana. She also founded the I-90 Collective, the Second String Orchestra, Bozeman Chamber Ensembles, and the Period Performance Workshop. Carrie holds music performance degrees from Carnegie Mellon, the Cleveland Institute of Music, and The Juilliard School. Some days she loves to skate ski almost as much as practicing the violin. baroquemusicmontana.com

A very large part—we shall probably never know how large—of J.S. Bach’s music is lost. Probably two-fifths of his cantatas have disappeared, but a much larger percentage of purely instrumental music is lost, simply because there were no institutional means of organizing or preserving it. Scores and parts might be handed to performers, passed on to others, and so on. As a result, we must assume that the surviving orchestral work of Bach—the six Brandenburg Concertos, the four orchestral suites, and upwards of twenty solo concertos—represent only the tip of the iceberg. Most of the surviving works were composed (or at least put into their present form) during the six years, 1717-23 when Bach was in the service of the Prince of Anhalt-Cöthen. The court was Calvinist, with little or nothing in the way of elaborate music at the church services, so Bach devoted himself almost entirely to the production of secular music such as birthday cantatas or chamber and orchestral works for his music-loving patron.

Of the four surviving orchestral suites, the B-minor suite is the smallest and most intimate of the four works, scored simply for flute, strings, and continuo. The term “suite” is a modern convention, used to describe a set of dance movements that follow one another in succession (“en suite”). Bach himself called these works after their largest component, the grand French-style overture, and indeed they are published as Ouvertures. The remainder of the work consists of stylized dance movements employing the basic metrical patterns of the dances in question, but intended for concert use, not for the ballroom. The abstract movements are often of dance character (the rondeau uses the meter and flow of the gavotte, for example). The flute’s prominent part offers plenty of opportunity for virtuosity, as in the Double to the Polonaise, a kind of variation on the dance, and the saucy “Badinerie”—a word that Bach invented as a musical term (it means “banter”) to describe the soloist’s cheerful chatter.

As with today’s performance, previous BSO programs have, at most, excerpted movements from Bach’s four orchestral suite. (The one exception: Anne Harrigan conducted the complete Suite No. 1 in March 2009.)

The Four Seasons is the best known of all Vivaldi’s works. Inspired by the landscapes of Italian artist Marco Ricci, Vivaldi used his creativity to become the first composer to set his music to poetry, thus producing the one of the earliest known examples of program music. The Four Seasons was published with poems that were possibly written by Vivaldi.

Vivaldi’s The Four Seasons can be heard on a multitude of Hollywood soundtracks such as Tin Cup, Spy Game, What Lies Beneath, and The Other Sister.

Vivaldi first published The Four Seasons in 1725, as part of his Opus 8 Concertos, a grouping of twelve works which he titled, Il Cimento dell’armonia e dell’inventione (The Contest of Harmony and Invention). While the other concertos represent his usual masterful conception of form in art, The Four Seasons are boldly experimental, combining the structure of the solo concerto with the musical depiction of events found in nature, with telling results.

Each of the four concertos is accompanied by a sonnet describing the atmosphere of the season. Scholars are unsure whether the music or the poetry came first, or even who penned the four sonnets. Given how neatly the three-part structure of each sonnet lines up with the traditional three-movement form of the concerto, many believe it was Vivaldi himself. More than just general inspiration, fragments of the sonnet are interwoven directly into the score, giving concrete insight into how Vivaldi imagined his music brought to life the poem’s vivid imagery. Whoever the author may have been, it’s clear that the Four Seasons follows a specific narrative, making it one of the earliest examples of what we call program music—a genre that wouldn’t hit its stride for another two centuries!

This is only the BSO’s second complete performance of this work. The first featured Benjamin Beilman in November 2011, while Christopher Kimber presented just “Spring” and “Autumn” in November 1976.

dorme il copra col fido can à lato
The goatherd sleeps, his faithful dog at his side.

di Primavera all’apparir brillante
When Spring appears in its brilliance.

Scioglie ‘l Cucco la voce, e tosto intesa
The cuckoo begins to sing and at once

il timore de’ Lampi, e tuoni fieri
By his fear of the lightning and the heavy thunder

Finiscono col sonno il Lor godere
They finish their merrymaking with a sleep.

Fà che ogn’uno tralasci, e balli, e canti
All are made to leave off singing and dancing

e La staggion ch’invitta tanti, e tanti
And by the season which invited many

Il Cacciator all nuov’alba à Caccia
At dawn the hunters

de schioppi, e cani, ferita minaccia
Of the guns and the dogs, and wounded it tries

e per soverchio gel batter i denti
With one’s teeth chattering through the cold.

Passar al foco i di quieti, e contenti
To spend the quiet and happy days by the fire

Mentre la pioggia fuor bagna ben cento
Whilst outside the rain soaks everyone.

8 Per timor di cader girsene intenti
And go carefully for fear of falling.