Symphony in the Park

Click below to read all about Symphony in the Park! 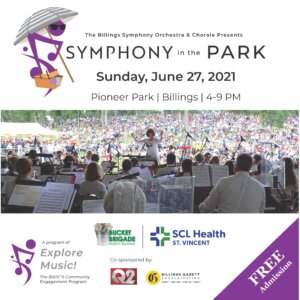 Symphony in the Park Schedule 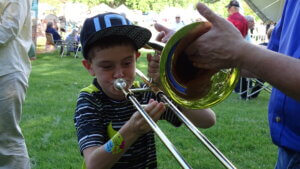 Ever want to play the violin, trumpet, or flute? Now’s your chance! Great for kids and adults alike. Come, try out one of the many instruments provided by Eckroth Music and Hansen Music. 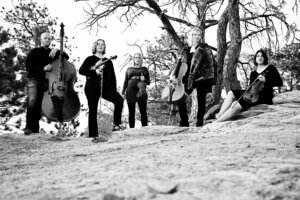 Stillwater Strings specializes in playing unique and customized music for special events including weddings, receptions, funerals, and banquets. Each member is native to Montana and lives in the Billings area. Each member has degrees in music and has played for most of our lives.

Hey, Kids! Gather by the stage area with your friends. We will choose a handful of enthusiastic hopefuls to compete for a chance to conduct the orchestra later in the evening. Feel what it’s like to help make beautiful music. 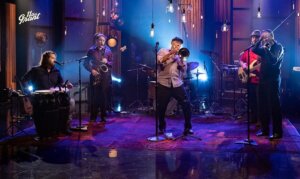 John Roberts began playing the piano at the age of 5 while living on an isolated ranch in Southeastern Montana. There was no TV, but there was a piano. From age 11-18, in Malta, MT, he was in band (trombone) and choir in the Malta, MT schools.  After graduating in 1996 from Montana State University-Billings with a BA in Music Performance, John moved to Los Angeles to earn his Master of Fine Arts in Western Orchestral Performance from California Institute of the Arts.

Roberts is a Professor of Low Brass at MSU Billings, teaching Music Theory, Aural Perception, Jazz Ensemble, Commercial Ensemble, World Music courses, and more.   He is active in the Montana and Los Angeles performing and studio scenes as a bandleader, studio musician and composer/arranger.  John is currently recording and composing for his next album, part of which was recorded in Santiago de Cuba and Los Angeles.  This record will be a collaboration between Cuban, Congolese, Los Angeles, and Montana artists.