The BSOC’s Brass Quintet presents a dynamic program of music from the Renaissance to the present day, augmenting the variety of musical styles with an informative and entertaining narrative. This “Baroque to Broadway” or Bach to Beatles” format promises to be an inspiring evening! 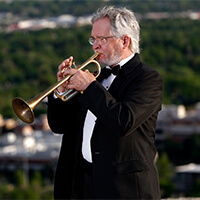 He is the principal trumpet of the Billings Symphony and the Rimrock Opera Orchestra, as well as a member of the Yellowstone Chamber Players and the Billings Brass. During the summer, Dr. Fenderson is on the faculty of the Red Lodge Music Festival.

A native of Maine, he was a member of the Portland Symphony Orchestra before moving to Florida, where he taught at the University of Tampa and was a staff musician at Busch Gardens, Tampa Bay. 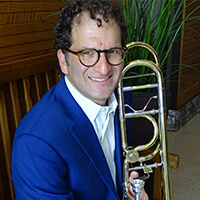 Mark Soueidi is in the midst of his doctoral studies in music at the Jacobs School of Music at Indiana University, studying with Peter Ellefson, and is currently on the music faculty at Rocky Mountain College in Montana. Mark also served as Adjunct Professor of Trombone/Low Brass at the University of Wyoming from 2012 to 2016, where he taught trombone/low brass, lectured music courses, founded and conducted the UW Trombone Company, and performed/toured with the UW Faculty Brass Quintet, The Snowy Range Brass. He has served as guest clinician and soloist in Colorado, Wyoming, Montana, Illinois, Indiana and overseas in Italy and the Middle East.

Originally from Montana, Mark studied with Lance Boyd at the University of Montana, earning his Bachelor of Music in Trombone Performance. His orchestral experiences began in Montana, performing with the Billings, Bozeman, and Glacier Symphony Orchestras as well as a four-year appointment with the Missoula Symphony Orchestra as an undergraduate. Mark continued his studies with Frank Crisafulli and Michael Mulcahy at Northwestern University in Evanston, IL, where he earned a Master’s in Music and enjoyed performing under the direction of renown conductor, John Paynter. And this next year will mark his tenth season serving as Principal Trombone with the Billings Symphony Orchestra in Montana.

Following his grad studies, Mark remained in the Chicago area, pursuing a professional, freelance career, playing regularly with Chicagoland orchestras, including the Chicago Sinfonietta, Civic Orchestra of the Chicago Symphony Orchestra, the Illinois Philharmonic, Rockford, Elgin, and Elmhurst Symphony Orchestras in addition to performances with the Chicago Brass Ensemble and Millar Brass, under the direction of trumpet great, Vincent Cichowicz. He also enjoyed big band work with the Chicago Metropolitan Jazz Orchestra. In addition to his work performing in Chicago, Mark also maintained a studio of low brass students for well over 10 years. Each summer, Mark returns to Montana to teach and work at the Red Lodge Music Festival, under the direction of Billings’ teacher, Steve Patton, including a collaboration in the Arts without Boundaries Program.

When Mark’s not spending time with his family, he can be found cycling or “teaching” bicycles in a nearby bike shop. His passion for bicycles and the bike industry has included leadership positions in both the non-profit group, TrailNet, and the Billings Chamber of Commerce, working to further develop an effective bicycle infrastructure in the community.