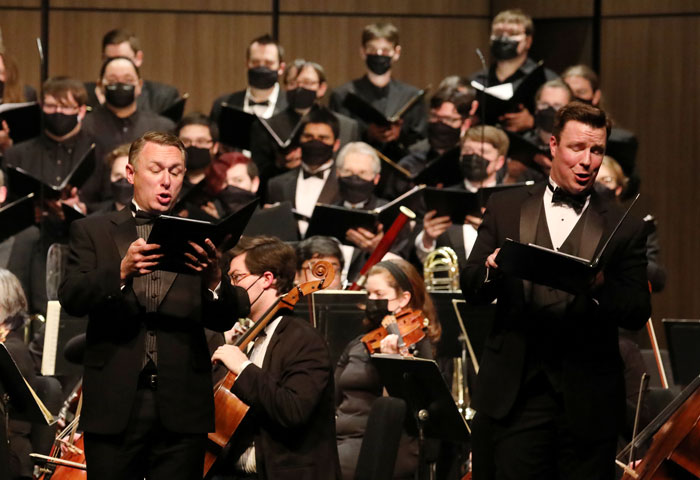 Handel’s Messiah is a fixture of the holiday season that is as inspiring today as it was when it was written 280 years ago. From the opening notes to the final amen chorus and every joyful hallelujah in between, Messiah provides a powerful presentation of the greatest story ever told.

Amy Schendel is a Billings-based performer who plays the clarinet and sings. She’s been recognized for roles in several operas, performs in community theater, and plays and sings with the Rocky Mountain Jazz Collective. Schendel began a new adventure this year in the position of Fine Arts Coordinator for the Billings Public Schools. Schendel also serves as the President of the Montana Music Educators Association (MMEA) and is a board member for Arts Without Boundaries.

Daren Small is an Assistant Professor of Voice at MSU-Billings and a distinguished bass-baritone soloist who enjoys sharing his passion for singing, both on stage as well as in the classroom and voice studio. Small earned his Doctor of Musical Arts degree in Vocal Performance at the University of Cincinnati College-Conservatory of Music. Small has a Bachelor of Music Education and Master of Education degrees from Montana State University and is an active member of the American Choral Directors’ Association, NAfME, NATS, and the VoiceCare Network.

Hannah De Priest is a soloist with a wide range of lyric repertoire, especially renowned for her baroque singing. She recently made her European debut as Gilde in L’amazzone Corsara for the Innsbruck Early Music Festival, Belinda in Dido & Aeneas, Ïole in Handel’s Hercules, and Oberto and Morgana in Alcina. A lover of art songs, she performs a repertoire that spans centuries with her husband, pianist Michael Pecak. When she’s not practicing, De Priest enjoys cooking vegetarian food, reading detective novels, watching stand-up, and going on long walks with her rescue dog, Teddy.

Klaus Georg is an active tenor, teacher, and conductor in Chicago. He is in demand as a concert soloist, having been featured with groups such as the Chicago Symphony Orchestra, Music of the Baroque, Chicago Bach Week, Chicago Master Singers, and many others. An active choral musician, Georg is a section leader in the Chicago Symphony Chorus, sings in the choruses of the Lyric Opera of Chicago and the Grant Park Music Festival, and frequently works as a diction coach with professional singers and ensembles. Georg received a DMA from Northwestern University and is currently a full-time Lecturer in Voice at Loyola University Chicago,

These soloists, set against the backdrop of the full chorale, lend depth and emotion to Handel’s Messiah while the Billings Symphony Orchestra provides an expansive feeling of grandeur with instrumental fireworks and musical flair.

Handel’s Messiah is one of the most frequently performed choral works in history, and it carries audiences through the story of the birth, passion, and resurrection of Jesus Christ, the Messiah. It was said to have been written over the course of about four weeks by Handel in a fervor of divine inspiration for an Easter debut in Dublin. Soon after, Messiah took its place among Christmastime musical traditions.