Check out the digital program! 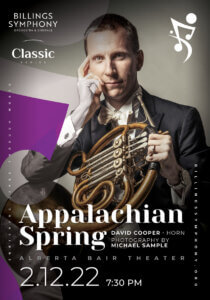 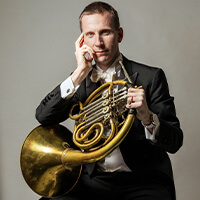 David Cooper’s passion for the French horn is in his blood, with both his uncle and grandmother serving as horn players in the Lansing Symphony Orchestra. When David was only 11, he earned his grandmother’s horn after proving he could play his first scale. She sent him home with a couple of Dennis Brain recordings and he has been enthralled with the horn ever since! He began his studies right away with Dr. Dale Bartlett, his Grandmother’s former colleague in the Lansing Symphony. David began playing with Michigan State University ensembles when only 15 and was in the top MSU collegiate ensemble at age 16.

Richard Strauss built a strong relationship with the Vienna Philharmonic, which has consistently played his music since 1882. At the request of Philharmonic members, he wrote the fanfare for the organization’s first benefit ball, which raised money for the musicians’ pension fund. The piece—played while honored guests, such as the Matron of the Ball, arrived at the event—has been played every since at the Philharmonic’s annual balls.

Brass and orchestral fanfares have appeared on BSO programs throughout the years, including James Stephenson’s Fanfare for Democracy at last June’s Symphony in the Park. This, however, is the first BSO performance of Strauss’ iconic fanfare.

From the composer: “Strum is the culminating result of several versions of a string quintet I wrote in 2006. Originally conceived for cello quintet, the voicing is often spread wide over the ensemble, giving the music an expansive quality of sound. Within Strum I utilized texture motives, layers of rhythmic or harmonic ostinati that string together to form a bed of sound for melodies to weave in and out. The strumming pizzicato serves as a texture motive and the primary driving rhythmic underpinning of the piece. Drawing on American folk idioms and the spirit of dance and movement, the piece has a kind of narrative that begins with fleeting nostalgia and transforms into ecstatic celebration.”

The Sphinx Competition is a national competition offering young Black and Latinx classical string players a chance to compete under the guidance of an internationally renowned panel of judges, and to perform with and receive mentorship from established professional musicians. As a Sphinx Orchestral Partner, the Billings Symphony is excited to perform this Jessie Montgomery work for the first time.

Strauss was not in a good place when he wrote this concerto in late 1942. In addition to serious health and career concerns, he was trying to prevent the incarceration of his daughter-in-law’s relatives at the Theresienstadt concentration camp. “It is hard to believe,” biographer Norman del Mar wrote, “that this is the work of a depressed old man living in fear of disgrace from the authorities of a war-beleaguered country, so light and carefree a style did he capture.” Indeed, barely a hint of this horrendous time is to be heard. Beyond the occasional moment that hints of darker things, the concerto exists largely in a Mozartean utopia, the hunting calls and lyrical pastoral tones that abound are perhaps an echo of an imagined past when life was more chivalrous, less complicated.

Tonight’s program is a series of (mostly) first performances by the BSO. While Strauss’ Horn Concerto No. 1 has appeared four times on BSO programs—the last in February 2006 with Principal Horn John Dutton—tonight is a BSO premiere for Horn Concerto No. 2.

From the composer: “Song of Hope is dedicated to my good friend Ryan Anthony and his charity, Cancer Blows, a foundation set up to raise awareness and money to further the research that has helped give his and many other families a hope for a future following Ryan’s diagnosis of multiple myeloma. In these challenging times of Covid-19, of seeing the destruction and hatred on our streets, and where love and empathy feel devastatingly lacking, the core idea of arranging this piece for flex ensemble comes directly from the message Ryan carried with him every day of his incredible battle with cancer: hope.”

This is the first BSO performance of a Peter Meechan work.

Copland composed Appalachian Spring for Martha Graham, who produced, choreographed, and danced in the first performance on October 30, 1944, at the Library of Congress in Washington, D.C. The work was performed in New York the following spring, winning the Pulitzer Prize for music and the Music Critics Circle award for the outstanding theatrical work.

Copland later arranged a suite for full orchestra, omitting a few passages where the interest was primarily choreographic. The suite is played without pause, although it falls into eight sections. Copland describes each scene thus:

The Billings Symphony previously performed Copland’s Pulitzer Prize-winning suite in 1986, 2000, and 2007. Variations on a Shaker Melody appeared on the 1975 Park concert.

Michael S. Sample began work as a professional outdoor photographer in 1970 after college and military training. In 1972 he photographed and published Mike Mansfield’s Montana and the following year began publishing the Montana Calendar. His book Montana on My Mind is a collection of images which celebrate the beauty, heritage, pride, and spirit of Montana. His photos have appeared in National Geographic, Outdoor Life, Sports Afield, Time, Sierra, and Montana magazines. In addition to his work as a photographer, Michael co-founded Falcon Press, a publishing house specifically for western authors and artists like himself. He served on the board for the Yellowstone Association and supported countless other local and national organizations both privately and in his role as Vice President of the Sample Foundation.

Michael treasured the natural world, and he did everything in his power to preserve it through both his photography and his philanthropy. Prior to his tragic death in June 2014, Michael worked with Anne Harrigan on a number of art and music presentations that were well received in Billings and in Michigan. The Billings Symphony thanks Michael’s widow, Barbara Sample, for allowing us to reprise Michael’s last collaboration, tonight’s Appalachian Spring.