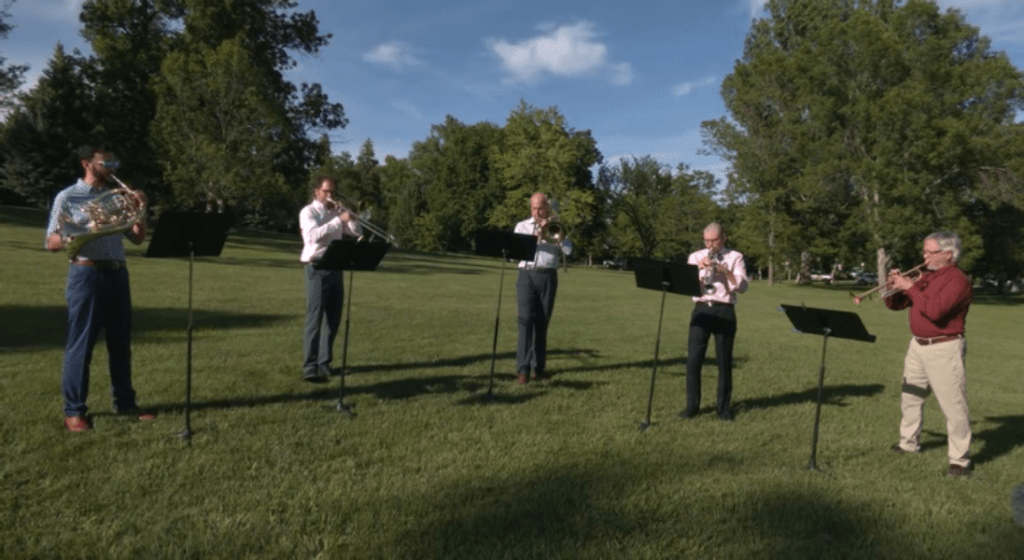 BILLINGS, MT – The Billings Symphony Orchestra & Chorale is kicking off its 2021-22 season in a big way with a brass quintet performing at the historic Billings Depot at 7 p.m. on Thursday, Aug. 26.

Music lovers don’t always get the opportunity to hear a brass quintet, particularly one of this caliber with seasoned musicians, many of whom are educators as well as performers. The quintet is led by trumpet player Mark Fenderson, a professor of music at Montana State University Billings. His student, Tyler Honcoop, joins him on second trumpet. Mary Robertson plays horn, Mark Soueidi, a professor of music at Rocky Mountain College, plays lead trombone and West High band director Steve Patton plays bass trombone.

The concert is part of the Sukin Series, which is funded by the Sukin family, and includes six programs held either at the Babcock Theater or the Billings Depot. On Oct. 14, Supaman, a member of the Crow Tribe who is a dancer and hip-hop artist, will perform at 7 p.m. at the Babcock Theater. The Classic Series opens on Sept. 25 at the Alberta Bair Theater and features pianist Gabriela Martinez performing works by Mussorgsky and Rachmaninoff. For information on other BSO concerts and special events, visit billingssymphony.org.

Bob Sukin said his family funds the Sukin Series as a way of bringing high quality music to his hometown.

“There have been four generations of Sukins in Billings,” Bob Sukin said. “I attended the Billings Symphony concerts as a child at the Fox Theater and I played clarinet in the Senior High Band under Stan Richards.”

Bob Sukin’s son, Steve, played trumpet in the Billings Senior Band with Mark Soueidi making a nice connection between the season sponsor and the musicians performing in the first concert in the series. Soueidi said he is grateful to the Sukins for their sponsorship, and sees it as a significant reward as a musician to get to play in a chamber session.

“This is what is distinguishing about the Sukin Series, it is apart from the orchestra concert, and it is much more intimate for the musician and the listener,” Soueidi said. “This is harkening back to the early 19th Century when salon performances were held in people’s home.”

The program for the quintet performance was put together by Fenderson with input from the other players. He called a quintet a democracy where everyone has a voice. The program is split into two parts. The first features a piece from each of the five periods of music, including the Renaissance, Baroque, Classical, Romantic and modern. After a short intermission, the second half of the program is a brief journey through American music, including folk, ragtime, and early jazz. It finishes with a collection of music from Brazil. Interspersed throughout the program, the musicians will talk about the music and provide some of the history behind the pieces.

The Billings Depot is a perfect setting for such a program, Fenderson said.

“It is really good for brass. The floor is hard and the walls are hard, and it’s historic. This will be fun,” Fenderson said. “People think of a stereotype of brass instruments being very loud. They can be played in a chamber setting with music that is arranged to work well with audience members sitting just a few feet away.”

Single tickets start at $15 for students and under 30 and $30 for adults. Full subscriptions for the Sukin Series will be sold at the concert.